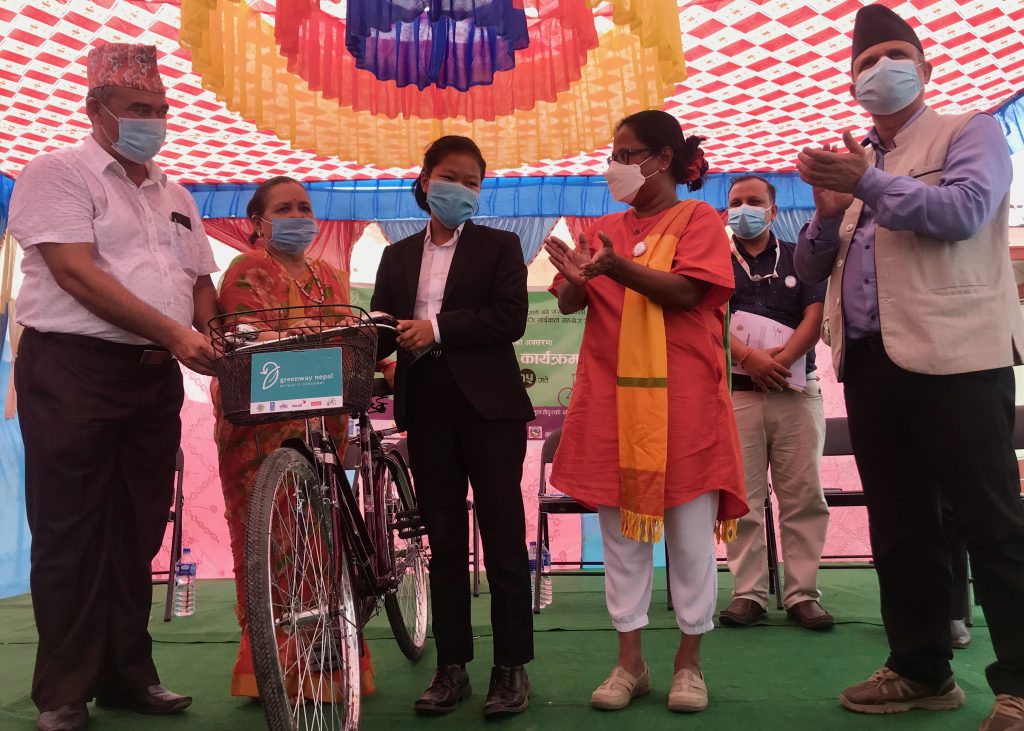 Greenway is a campaign to promote cycling and other environmentally friendly practices in Nepal. It is a multi-stakeholder campaign implemented by Cycle City Network Nepal (CCNN), with support of and in partnership with the Ministry of Public Infrastructure and Transport (MoPIT), United Nations Development Programme (UNDP), Lalitpur Metropolitan City (LMC), Tulsipur Sub- metropolitan City, Kantipur Media Group (KMG), Ncell Axiata Limited. and IME Pay. The joint initiative with the slogan – “My way is the Greenway ” aims to create a platform to promote green initiatives and bring onboard institutions and people who believe in promoting sustainable urban mobility, curbing carbon emission, conserving the environment, and fostering partnership for urban sustainability.

As part of the “Women On wheels” campaign, 50 bicycles were handed over to different school girls from different schools around Tulsipur Sub-metropolitan City. The distribution program was held on the occasion of International Day of Peace, 21 September 2021 at the premises of Tulsipur Metro College, Haripauri, Dang. The girls were selected from 20 community schools belonging to 8-12th grade on the basis of their distance from school, low-income group family, commitment to complete their education, and not to marry before the age of 20.

The distribution of bicycles to the girl students was followed by a 2km bicycle rally from Tulsipur Metro College. Marking the International Day of Peace a tree was planted jointly by Mayor of Tulsipur Sub-metropolitan City- Mr. Ghanashyam Pandey and Resident Representative of United Nations Development Program- Ms. Ayshanie Medagangoda-Labé on the premises of Tulsi Metro College.

Speaking at the program, Mayor of Tulsipur Sub-metropolitan City- Mr. Ghanashyam Pandey expressed that a bicycle is a tool for the freedom of mobility of girls if girls move forward as the world progresses. I commit to making Tulsi municipality a cycle-friendly city by adopting a bicycle policy in the near future. The campaign ‘Smart Chori’ will continue further in the future with more projects for women empowerment.

Vice president of Cycle City Network Nepal, Nivesh Dugar, addressed the program saying that the activities done for the promotion of Cycle and cycle-friendly programs have enhanced the sustainable development goals.

Senior Communication and CSR specialist of Ncell Axiata Limitedrepresentative, Mr. Ramesh Shrestha congratulated all the recipients of bicycles on the day. The company states that it is pleased to join hands with UNDP for this green cause to promote cycling and contribute to achieving multiple SDGs related to the environment, health, and education. This initiative is aligned with Ncell’s commitment towards sustainable society as well as its parent company Axiata’s journey to becoming a net-zero carbon company.

Resident Representative of the United Nations Development Program- Ms. Ayshanie Medagangoda-Labé shared that the commitment from the local government has shown. Towards the sustainable development goals and sustainable mobility. I would also like to congratulate the safe, inclusive, resilient, and sustainable city on sustainable development goal no 11. We want to have a balance of carbon dioxide in the atmosphere. We are trying to promote sustainable transport- bicycles which can help reduce the impact of climate change. We would like to promote green mobility for girls. The distribution of bicycles is not enough. We need to create a conducive environment for safer mobility for everyone, especially girls. Even families play a vital role in encouraging the use of bicycles by women and girls.

Deputy mayor of Tulsipur Sub- metropolitan City, Maya Sharma shared that the Smart Chori initiative brought forward by Tulsipur- sub-metropolitan City has successfully reached out to quite a few young girls and women. There are several programs in the pipeline towards the empowerment and welfare of women.