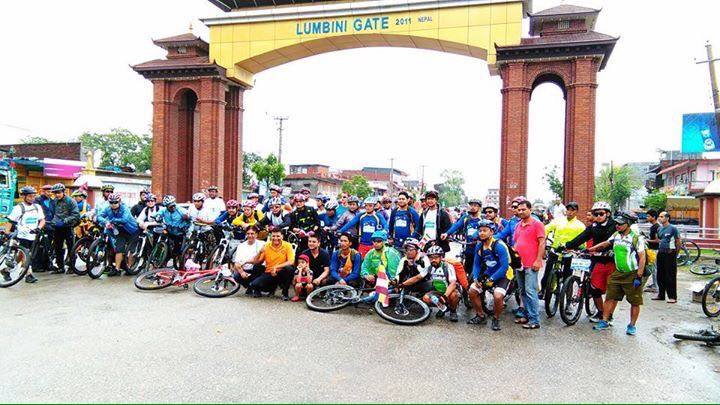 Pedal for Peace: An event report

Tour De’ Lumbini is a cycling event which is organized  every year to mark the auspicious day of Buddha Jayanti; the birthday of Gautama Buddha . “Tour De’ Lumbini- Pedal For Peace is a four daylong tour that starts from the capital city of Kathmandu and ends in Lumbini. Riders join from different parts of country to celebrate cycling and spread the message of Peace.

The main aim of the event is to promote Lumbini with the message of Peace from Lord Buddha nationally and internationally. The cycling event targets begginers, professionals, government officials, national and international icons and celebrities to join the ride.

We started our event from Kathmandu, Swoyambhu with active minister Ananda Prasad Pokhrel, Vikhu Nigrodh Vice President of Lumbini Development Trust and world cyclist Puskar shah. After a short speech and some breakfast our ride started with offerings from Monks and Locals, we were offered with khada, tika, eggs, fish and alcohol(swoka). We started our ride and completed kora of Swoyambhu and we started our ride from Kathmandu. After riding some uphills we again gathered at Thankot check-post.  Our volunteers briefed on road safety, an essential part of riding on one of the most dangerous highways. Different groups were divided so that each rider can ride safely. Downhill riding from check-post was a thrilling experience but also equally dangerous. After riding downhill and clocking up a few more kilometers we reached our first stop where lunch awaited the hungry bunch of riders. Every rider and crew member got some rest time post lunch. The ride resumed.

The ride progressed in a really awesome manner with awesome view of rivers and hills clad in green. There were many water points on the way. Most of them were supported by Armed Police Force (APF). We were provided with water, lemonade and juices at various stations. We kept on riding and we came to “watermelon point” where we were offered fresh watermelon. The next stop was Riverside Spring Resort, Kurintar. Tents had been set up already. In time, all the riders reached out first pit stop. Some riders could not make it on their bikes so they were supported by a vehicle constantly following us en route. Tents were picked and everyone clocked in an hour of rest. Then, dinner was served. Some riders went for sleep but some still kept the party going.

Next day, we woke up early in the morning, got fresh and had our breakfast. After our breakfast we started to prepare for our ride, we packed our luggage and loaded them in the bus carrying only the very essentials with us. We did some warm-up before continuing our ride. The whistle went off and we started ride day 2. Again we were divided into groups for our safety. When we reached Mugling, we were welcomed by the locals. We were surprised with the warm hospitality of the locals. The road was decorated with flowers and water pots with national flags and buddhist flags. Due to the construction works of the road from that point, we were not able to ride our bike forcing everone to load their bikes in trucks while the riders got on a bus. We nearly reached to Narahyangadh by bus and again from there we started riding. We nearly travelled thirty kilometers by bus. After riding some kilometers, we reached the lunch stop. Water spots regularly greeted us on our way. Also, we got double lunch on that day. After having lunch some went for playing football but most of them sat for taking rest. After some time we again continued our ride. We kept on riding and finally got water spot, everyone started filling their water bottles. After riding around twenty kilometers we finally reached our destination where tents were kept ready for the day two slumber.

A water scarcity meant that the riders took it upon themselves to utilize the fresh water of Arun river to the fullest. After being fresh every one came back to the school, where our tents were ready for us. Loud music kept everyone in the groove.. After having dinner some participant went for their own refreshment, some kept on dancing while the fatigued decided to call it a night.

We woke up early in the morning the following day and got fresh and stretched a while. On that day we had to ride up hill so most of them left early in the to beat the heat. We had our breakfast at Dauune. As the gradient grew, temperatures began to ride making the climb even more treacherous. The downhill that greeted us at the summit was one to cherish. Some took a slow run down while other pumped up the adrenaline. After completing the downhill riding there was another of those APF water points. Then on, it was all plains till Butwal giving the riders one of the smotthest turfs to ride on. After reaching Butwal, there was a welcome event for us by   Butwal Cycle City(BCC). After finishing welcome  program by BCC we did some ride around butwal city and we continued our ride towards Bhairahawa. Finally, we reached Bhairahawa cricket ground where our tents were kept ready. After reaching there we were entertained by two professional stunt riders(Sandeep Ale and Nikesh Khadka). After some time our dinner was ready. Everyone had their dinner and some went for rest and some went for refreshments.

On the fouth day, we woke up early in the morning got fresh and we were ready for the ride. Everyone was ready and we gathered at Lumbini gate at Bhairahawa. After having group photo we started our ride. After riding around 30 kilometers we finally reached our final destination Lumbini. Everyone was happy after reaching there. Every one forgot their pain and fatigue in the spur of the moment. There was a big event organized by the government, many delegates were invited to the program along with President, Prime Minister and different Ministers. Many delegates came representing their nations. We also joined the program. After sometime we went through Lumbini, we visited Mayadevi temple and many other monasteries of different countries. We also went to Shanti stupa. Finally, we went for lunch in one of the finest Thakali bhancha ghar. We took rest for some time and it was time to return us to Kathmandu. We loaded our bike to truck and bus roofs. On that same day around 4 pm we returned back to Kathmandu. We had so much fun while returning to Kathmandu. We stopped at Dauune for our dinner. After having dinner Puskar dai started singing his own composed songs (Lattar khaire bhada, sani nani, etc). Many of them started dancing on his songs. We enjoyed too. After some time again we started our journey to Kathmandu. Finally, around 7 am in the morning we reached Kathmandu and concluded our event with suggestions and feedback. Upon completion of our grand event, the truck full of bikes reached too. Slowly we took our bikes and fatigued selves to our homes.

Lastly, I would like to thank all the organizers, supporters, volunteers and all the participant for making this event a grand event. Hope, this event grows much bigger and better next time. Hope to see you guys in next Tour De’ Lumbini-2017. 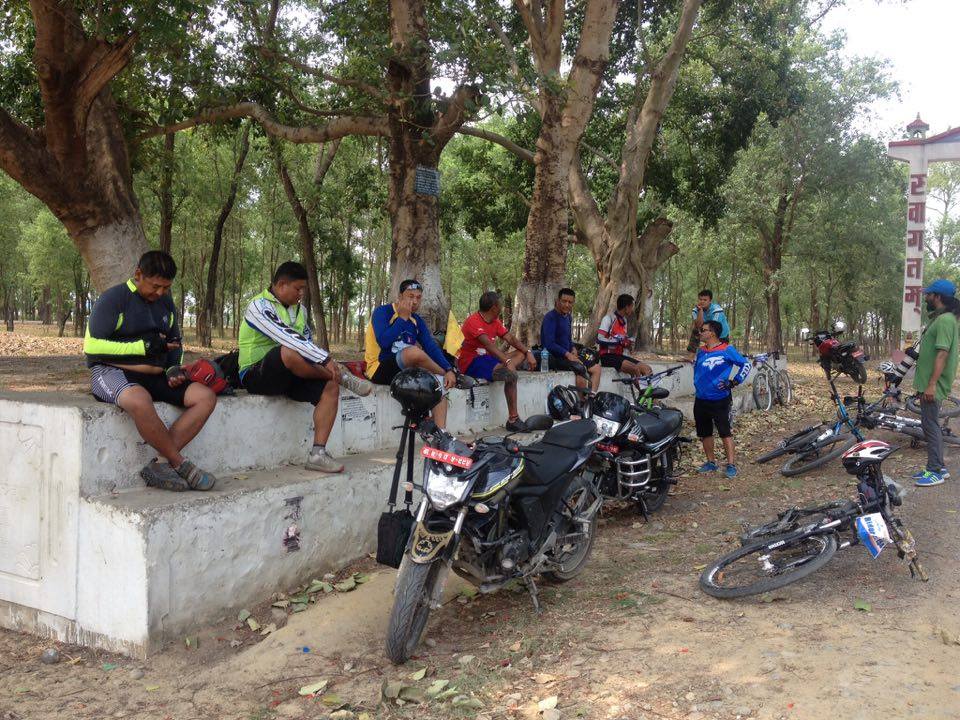 World Bicycle Forum 2020 to be held in Nepal

Riding for a Cause: Ride for Refugees II